The raison d’etre of this space is simple – I had a lot of questions around riding, a healthy cynicism of those standing to make a profit in answering my questions, a need to draw my own conclusions without re-inventing the wheel along the way and desire to share the journey with others who might find themselves with similar questions.  If I was going to wear stretchy shorts, there was going to be a reason that didn’t include because they do.

I have attempted to ride through the winter this year with a reasonable amount of success.  The mileage hasn’t added up as quickly as the summer, the ride calendar showing big gaps during the coldest periods.  There’s little doubt that riding in the winter requires more effort – physical and mental.  The biggest mental effort comes off the bike, before the ride begins.  Ugh…-15…west wind…cold and windy…I don’t need to ride…it’s going to suck…I’ll be cold…  Trying to stay out of that self-defeating space is hard for me.  My solution is fairly straight forward –each evening, I lay out all my gear and get everything packed before I look at the forecast for the morning.  If it’s been especially cold, I make sure to have the extras within reach so there’s no messing about in the morning.  Get up, get the gear on, get the pack on, get out the door.  Prudence dictates that a proper look at the current and forecast conditions is done before departure – I don’t need to freeze to death in an attempt to prove how hardy I am – but I don’t have to think about anything and all the work is done. 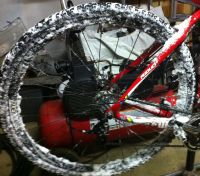 I have however discovered my personal riding hell, that thing most likely to keep me off the bike.  Hours after a good snowfall, traffic has trampled the fresh snow into semi-packed tracks and trails along the roads.  The snow is thick now, having been compressed by so much traffic, but it is not yet solid.  The weight of bike and rider is not enough to press through to get a solid purchase on the packed ice below but we will be pushed around by the varying consistencies of snow density and the icy ruts lurking beneath.  The wheels are travelling entirely separate routes from one another as the front end pushes and plows and slides around.  This is entertaining enough on flat, quiet roads but degenerates rapidly into abject terror on descents and mortal fear on busy streets.  Climbing becomes, quite literally, impossible as the tires, despite their studs, can find no traction to propel the bike through the thick snow and eventually my speed falls below that required to maintain a rubber-down orientation.  The last big snow included a perfectly-executed over-the-high-side shoulder roll, a vain attempt at climbing via the sporadically-shovelled sidewalks and a lot of bicycle carrying.  The paths were amazingly clear and plowed.  The roads?  Not so much.

So – the how.  How do I ride in when it’s snowing and blowing and cold out? 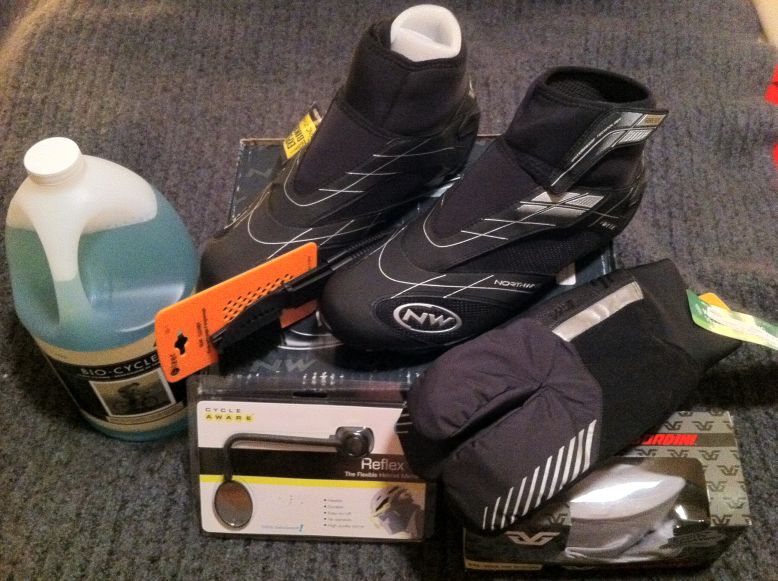 I was dubious of the Pearl’s ability to keep me warm in Calgary’s winter but it has continued to surprise me, time and again.  Those three items  – the Merino and two Pearl layers leave me sweating more days than not.  My own tendency is to ride hard so I might be warmer than someone riding a little more relaxed.  No question that my legs and hips get chilly when it’s really cold.  The Roubaix / driWear combination is just not enough to slow down the windchill effect.  I’ve got a pair of unlined GoreTex rain pants I’ll try over top the next time I can’t talk myself out of riding when it’s RBC – Really Bleedin’ Cold. The bike – what about the bike?  I’ve chosen to continue riding the Ridley through the winter though I’ve been told that’s unfair to the bike.  The folks that made it don’t think so:

@forgedcyclist And a nice place to ride your bike! How do you like the X-Fire with discs? *BV

but I do expect that grime in the drivetrain will shorten its life.

Luckily – or not – I seem to be much slower in the winter so I rarely get onto the big ring – one less part to worry about changing in the spring.  I fully expect to replace the chain, rear sprocket and inner chainring but it’s not like I’m riding Dura-Ace or SRAM RED level components – the parts are relatively inexpensive.  I wash the bike regularly, more when the weather is back and forth between freezing and melting (which provides its own set of riding challenges).  It’s an opportunity to check the bike over for loose fasteners, damage, chips and so on.  It’s also a key piece of extending the life of the drivetrain – washing the grit out of it. For chain lubrication I’ve stayed the course with the usual red-top bottle of Teflon dry lube.  Dry attracts less grit and grime and keeps the overall drivetrain cleaner.  I scrub the chain down with a brush during its bath until I can handle it without getting dirty.  Add one drop of lube per roller, cycle it and let it sit until the next morning, then spend a minute or two back-pedalling the chain through a rag to remove the excess.  When it’s wet out, I’ll spray some all-in-one cleaner/ lube onto a rag and give the chain a wipe to keep the surface from rusting. 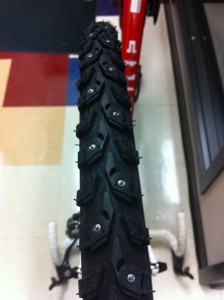 Studs, but only in the center.

I bought some Nokian IceSpeed studded tires which improved things dramatically but they are not a panacea – they do not replace dry pavement and slicks, nor do they replace common sense.  They have no studs on the sides, only the middle, so leaning into an icy turn will not go well.  I know this.  Otherwise, they provide a healthy amount of winter traction for the conditions I encounter most days, day-after big snow being the major exception.  That’s it – other than extra attention paid to the drivetrain and some studded tires, the bike is as-delivered.

There you have it – one man’s recipe for Winter Riding Success.  This is not a set of directions to tell you how you should approach riding through the winter.  Rather, this is how I managed it.  I’ve skipped out on some of the brutally cold days admittedly – I’m good down to -20C, with windchill to -30C but that’s it.  The admonishment you’re too old to develop character through athletic feats, a response received when trying to figure out how to ride the semi-packed snow, drove home the awareness that with an entire household depending on me to put food on the table, I don’t need to break my collar bone (or worse) trying to prove to myself how hard-core I am.

I figure if I can do it, anyone can.  It takes more prep than going for a quick spin in the summer and getting past the mental obstructions thrown up takes some effort but really, it’s not that hard.  Layer up and get out there (or don’t – your call really). 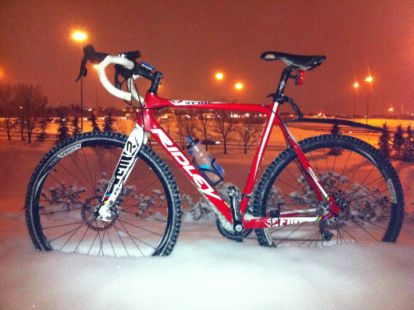 After much threatening, promising (it’s not a threat it’s a promise), pondering, planning, excuse-ing and otherwise stalling I plunged into semi-winter riding this week.  I say semi because, thankfully, the vast majority of my commute is on nicely brushed and/or plowed pathways.  The most treacherous part of the ride is the beginning, and conversely, coming home, it’s the end.

The weather has been pleasantly mild with above-freezing highs during the day which has made the journey a little easier each day.  This is reflected in my ride time as it slowly climbs back towards summer speeds.  This however is impacted by my continued use of summer tires…because I am foolish, or in the words of Adam, stupid.  Actually I’m cheap and lazy.

It’s not that I haven’t purchased winter tires – I have, I just don’t have them.  I received an unexpected Amazon.com gift card recently and while normally I’d gleefully spend it on numerous books, I took advantage of their marketplace and ordered some studded winter tires.  Referring back to my previous statement espousing my Scottish ancestral stereotypical economic behaviour, I opted to go with the basic freight which means no actual tracking other than “it’s shipped” and “it’s arrived”.  So far I know they’ve been shipped and should arrive sometime between the summer and winter solstice of 2012.  Maybe. 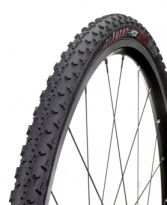 Shortly after buying the X-Fire, I pulled off the very light, very quiet and very soft Clement PDX cyclocross tires and replaced them with heavier, noisier but more durable (and 1/4 the price) Kenda commuter tires.  The Clements are amazing and fast but the paved path was chewing them down in record time and at $40 a pop I figure I’ll save them for proper ‘cross riding.  The Kendas are not winter tires and don’t claim to be.  The tight tread packs with snow and their grip on ice is akin to my 3-year old’s grip of string theory.  This creates an adrenaline-fueled, butt-clenching commute. 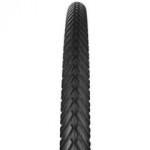 The thing about an old, established neighbourhood with quiet streets is the combination of tall, mature trees and reduced traffic mean a lot of snow on the road.  My route happens to be downhill, in the dark, through just enough snow that it’s more of a relative-trajectory experience than a navigated one.  Both ends of the bike pick their own path and the complete lack of any meaningful traction means speed builds at a frightening pace.  I aim for the occasional patch of pavement where a judicious application of the brakes scrubs off some speed before we’re back on the ice and snow again.  An accidental yet liberal application of aerosol chain lube to the rear brake disc only adds to the excitement of it all.

The more sage among you might ask why don’t put the Clements back on – they look like they might work in the snow.  Laziness and Murphy’s law.  It’s a catch 22 actually.  I figure if I pull the wheels off the bike, pull the tires off the wheels, put the other tires back on and put the wheels back on the bike, I will get precisely one ride on them and the studded winter tires will show up, necessitating a repeat of the entire performance.  On the other hand, if I don’t change them, the tires will stay in postal limbo, arriving the day after I finally succumb to the lack of traction, fall down and break my other wrist thereby ending the season all together.  You see – I just don’t have a choice. 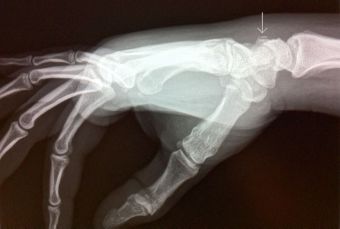 Remember, remember, the 10th of November