A week later and nary a peep from me here.  It’s become somewhat difficult to write about riding when I’m not riding.  I’d feared this point when I started writing back in the summer, knowing that winter would arrive one of these days, putting an end to my daily dose of the bike.   It wasn’t winter that stopped me admittedly, but the timing couldn’t have been much better as the past week our weather has been miserable to say the least.

My visit to the hand surgeon on Wednesday was fairly uneventful.  I have a bone “flake” – thereby giving credence to the notion that I’m flaky.  This is not any old flake however – it’s a flake from the pisiform bone, complete with tendons still attached.  Or something like that.  The terminology used by the doctor escaped me to be fair, right up until this: “it will take a long time for the pain to go away”.

“A cast for 6 weeks is what we normally do” he proclaimed, “but if you’ll promise to be faithful and wear it all the time, we’ll put you in a splint instead”.  I nodded in agreement as he still had his thumb dangerously close to my flaky pisiform.  He ushered me off to the splint lab, spoke briefly with the tech, promised to come back with a card so I could make an appointment for a follow-up in two weeks.  He left and never returned with his promised card which left me a little disappointed.  Not to mention that after showing me how painful my wrist was and telling me I’d be suffering pain long into the future, there was no discussion about pain management.  Thankfully I had several  percs left from my trip to the emergency room.

The splint process was quick and painless but not fully covered under Alberta Health.  Half way through the process she remembers “oh yeah, the splint isn’t covered – you’ll have to pay for it”.  At $21 it didn’t exactly break the bank but it still caught me by surprise.  At any rate, the emergency room splint  was in fact more comfortable and more rigid but lacked the ability to be removed and re-installed.  It was also large enough to make typing a single-hand + single finger affair.  My new plastic splint makes my hand and arm sweat and is woefully uncomfortable but it has two advantages – I can remove it to wash it (and me) and it allows the use of most of my typing fingers.  There’s a catch though – because it’s all plastic and removable, it doesn’t really prevent me from doing the dishes any longer.  Ah well – was a nice break while I had it. 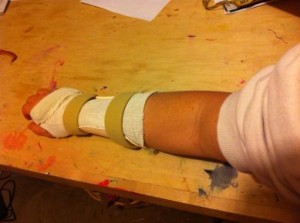 In truth it feels pretty good these days.  I spent a couple of hours cleaning the kitchen and mopping the floor and that left me hurting a little, but not nearly as bad as earlier this week.  I’m no longer driven to distraction most of the time which means I can be at work and actually do something productive.  At least in theory.

I snuck out to the garage last night to grab some tools while hacking a KVM switch and took a moment to gaze wistfully at the Rescue Bike.  Of course I thought immediately about going for a ride.  I swung my leg over and grabbed hold of the bars, checking the fit of the splint to the grip.  Unfortunately (or fortunately depending on your perspective) the absolutely freezing, miserable wind and snow made that  a wholly uncomfortable proposition and I quickly returned to the warmth of my basement.  Not without a firmly planted seed.  Must get some studded tires first.  And I bet I could ameliorate any of the more serious fitment issues with an application of my heat-gun and some patience… 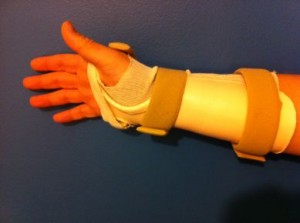 This picture makes me imagine I have a neck brace too for some reason. Weird.

It starts out innocently enough, a favour for others, a gesture of appreciation if you will.  Today being Thursday it is of course Doughnut Day.  Day of Sugary Carbohydrate Invasion.  The Thin End of the Sugary Wedge. 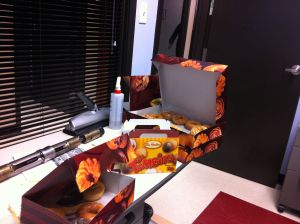 Most days I shuffle these evil things off my desk and out of my office but today I was invincible – no need to move anything.  I subsequently paid the price for my arrogance.

It started with a Tim Bit – a doughnut hole marketing scheme and as it turns out, an even thinner wedge end.  It is food from the devil.  Evil.  The bite-sized bit lures you into thinking you can have just one but it is truly the gateway drug.  By the time the dust had settled, there was spittle and drool splattered about the place, my desk littered in doughnut-remnants, evidence of the carnage that had just ensued.  The look on my co-workers faces was a mixture of horror and disgust with a trace of admiration.  I won’t add to you, my dear reader’s discomfort by putting an exact number on the victims, it is enough to know it was sufficient to feed a house of aspiring runway models for a week.

Having not ridden for a week I was already enjoying an overwhelming sense of self-loathing before my hubris had been thoroughly vanquished by the devil’s food.  Full of easily-accessible sugary fuel and disdain for my activity level, I took advantage of today’s Chinook – the wind, not my bike – to get out for a ride before the sun went down.  I headed north along the canal path, a section I don’t often get to ride.  It’s been under construction most of the summer and eventually fell off my ride list which is funny because I don’t have a ride list.  From 32nd I headed for Nose Creek Park and its short, steep hills to try to erase some of the day’s earlier carnage that was settling into my waist.

I made it to McKnight before the universe reminded me I know naught about riding in general and less about riding in faux winter.  As I came out from under McKnight, in a gentle right-hand corner, I realized the shadow across the path was in fact a thin layer of wet mud.  Immediately after that realization I learned that it was in fact a thin layer of very slick mud.  The front end washed out and two things went through my head in quick succession:  WWTS and; oh man – these stretchy pants are almost new!  Luckily for me, the slick mud gave way to a skiff of gravel providing a relatively low-friction surface on which to smash my hip without the added insult of melting the lycra to my thigh. 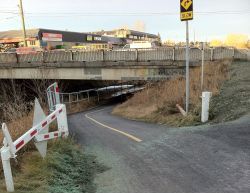 Enter here but beware the trolls 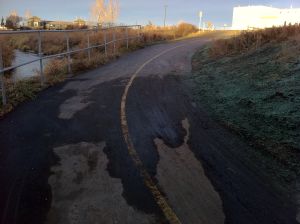 Fall down here (the trolls did it)

Remarkably there was no damage to the stretchy pants and no damage to the bike save for more character on the previously-characterized bar end.  My pride was bruised but otherwise I seemed to have escaped unscathed.  My right hand hurt a bit as one might expect when it’s called into duty to save the elbow.  I straightened my bars and brushed some of the dirt off before I hopped back on to continue my ride.  Get-off or not I was going on a ride.

As I rode out to Nose Creek Park, I couldn’t help noticing that my wrist was in fact much more tender than having just suffered a slap-fest with the pavement.  Putting any weight on it was excruciating but I could pull, break and shift without any drama.  I pushed on determined to get a few kilometres in before the sun disappeared and made things more treacherous than I’d just discovered they were.  I didn’t get far before my wrist, the rapidly setting sun and an unexpected head-rush that affected my hearing <?!> made the decision to turn around a prudent one.

I cycled home nursing an increasingly tender wrist, wary of anything that looked like it might be shadow, mud, water, gravel…I’d lost some confidence in the stiction of my front tire.  As a made my back along the path I’d just travelled, my hearing returned to normal but my wrist did not.  I stopped to take a picture of the offending mud before I made the climb back up to Centre.  I passed another cyclist headed for the mud and tried to warn him as he went by “it’s slippery under McKnight!” though it probably sounded more like nonsensical gibberish.  I imagine him skipping across the same gravel thinking to himself “oh…that’s what that guy was yelling about”.

Upon arriving home nurse Tracey tended to my wrist with a combination of homeopathic  treatments.  I’m starting to think it may be in worse shape than first thought as it’s rather swollen and stiff.  We’ll see how bad it feels in the morning and if it’s worse I’ll get it looked at after the Remembrance Day service.  In the meantime I’m extremely pleased with the performance of my MEC Roubaix stretchy pants – no holes, no damage of any kind. 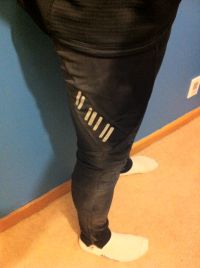 One skid, no flesh damage, no holes - perfect.

I also have a new appreciation for roadies who turn and flee at the slightest indication of imperfect road conditions.  It’s time to – at the very least – put on the knobbies.  Studded tires – you’re in my future.

*What Will Thomas Say? 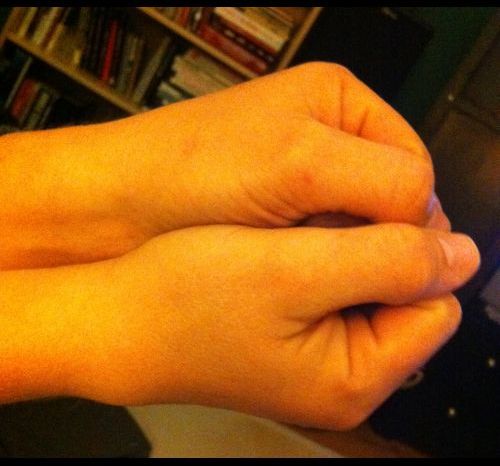 Snow finally arrived and gave my grand winter-riding plans a dose of reality.  The reality is I need more gear if I’m going to ride across ice-covered pavement in minus 15C temperature for an hour each day.  Are my MEC Roubaix stretchypants warm?  Yes…for a while, but they’re not made for out and out winter and -10 seems to be the limit on their own.  Do I like my smooth street slicks?  Yes, but the traction they provide on the frozen puddles on a scale of 1 to 10 (10 being sticky, 1 not) is like Robert Downey Jr. – less than 0.  I need snowmobiling quality mitts to keep the brake lever fingers functional but bicycle controls are not designed for mitts.  And what about my water?  And that guy with his blinding, flashing helmet light?

So all the bravado and bluster came to naught at the first sign of ice-slicked roads.  Studded tires are widely available but highly-rated ones are $130 each.  While I have no doubt they’re worth every penny, I don’t have those pennies in my pocket, especially as we approach Christmas.  Same for the $200 aluminium-fiber Pearl iZumi tights 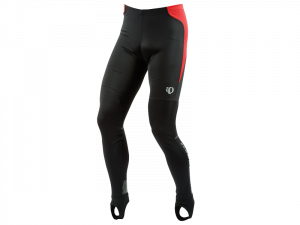 Pearl's Aluminium-containing winter tights modeled by someone who unexpectedly slipped off of both pedals. 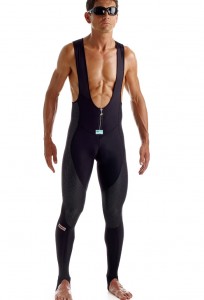 Assos bib shorts make my arms spring out like I'm smuggling grapefruit in my armpits.

It goes without saying I can’t afford to stray over to the Assos line either.  Besides, I haven’t perfected my what you looking at Assos stance.

I believe this is my excuse to buy an indoor trainer.  Just need a few more pennies.

In the meantime, I’m going a bit nuts.  I’m bored out of my ever lovin’ mind.  None of my normal pursuits capture my attention.  Standing in a library surrounded by books – which are my 2nd most expensive habit – I’m bored.  Pick up my favourite technical manual – bored.  A programming book?  Meh.  A hardware guide…nope.  I look out at my car and a long list of suitable to-do tasks reels off in my mind.  I resolve to do none of them.  I head out to the garage anyway and stare at the disarray of completed-but-not-cleaned-up projects that took over during the summer and quickly leave lest I trip, fall, hit my head and die alone, hidden in the mess that was once my mechanical sanctuary.

Food has lost its flavour and it’s fun, I’m craving everything yet nothing scratches the itch.  Television?  Whatever.  A movie?  Bored.  I’m bored of the internet.  Of Facebook.  My email.  Work.  Play.  Sleep.  If it is true that only a boring person can be bored, I’ve become a very boring man indeed.